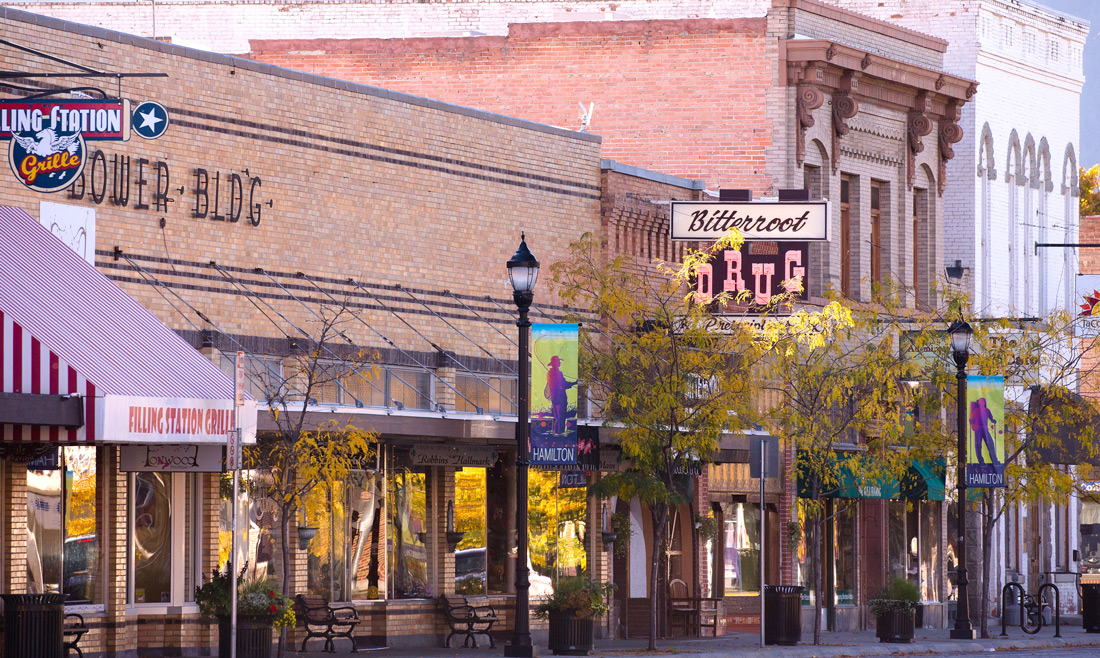 Our small towns are the comfortable gateways to big adventures.

There is more to the Bitterroot than natural splendor. Tucked in the folds of mountains and nestled alongside the Bitterroot River and her many tributaries are the welcoming communities that play a large part in making the Bitterroot Valley so special. The end of the trail is just the beginning of dinner.

Initially settled by Irish immigrants in 1889 and later followed by German settlers, Florence was originally known as One Horse. This must have been an attempt at irony as this bustling community included a general store, blacksmith, railroad station and as many as a hundred carloads of wheat coming through a day. Today more than a 1,000 people call it home.

As the first permanent white settlement in Montana, it comes as no surprise the history runs deep in Stevensville. Built on the site of the St. Mary’s Mission and named after Isaac Ingle Stevens who laid out the original town, it’s not all about the past however. Today you’ll find a charming downtown with a host of amenities and access to recreational enticements.

If you were one of the early residents you’d know this town as Garfield. Renamed Victor in honor of a Salish chief, this community today is home to over a 120 businesses and thanks to the many vacation rentals, Bed & Breakfasts and dining spots, it serves as great home base for your exploration of the Bitterroot.

This quaint community is home to the Teller Wildlife Refuge and a small town charm that is hard to pass up. Its name is derived from the French words for heart and valley and that pretty much gives you a good idea of what it’s like.

You can walk in the footsteps of Calamity Jane here in the Bitterroot’s largest town. Originally the creation of copper magnate, Marcus Daly, today Hamilton is the business center of the valley—and a lively one at that. With the county fair, micro-brew festival and Daly Days along with an emerging local art scene that’s generating a high level of downtown energy, there is always something going on.

With its distinct western architecture, you can feel the lingering presence of the gold rush at every turn in this thriving little community. You’ll also find a healthy variety of shops, restaurants and access to Lake Como.

If you’ve come to Montana and the Bitterroot in search of fish then Conner should be on your itinerary. It’s also home to the first ranger station in the United States and the oldest Ponderosa Pine in the Bitterroot.

Despite a small population, the town of Sula is home to some significant  points of interest. As the western gateway to the largest continuous wilderness area in the Lower 48, not to mention the sacred “medicine tree,” a source of many Indian legends, passing by Sula quickly would be a mistake.

Adventures, Vacation Ideas, Rodeos, Festivals
Subscribe To Our
Event Highlights
Be the first to know of exciting happenings
and exclusive offers.
No Thanks!

We use cookies to give you the best online experience. Please review our use of cookies and accept to continue. Learn More Ok